"I know I had fun," 10-year-old Quentin said. "Today was about friendship, sportsmanship, courage, respect, just a lot of stuff. I know I learned a lot."
Quentin, a student at Cunningham's CIRCLE Academy-Vermillion (CAV) in Rossville, and his classmates and teachers had just finished the school’s first Color Run and he was beaming with pride.

You see, learning comes in all different forms and at CAV, so does teaching.  In fact, our teachers and staff thrive on their ability to find creative ways to educate our students.
"What's really great about our leadership team and our staff here at CIRCLE is that we're always trying to come up with new and interesting ideas,” Assistant Principal Paul Dowling said, "so when we get everyone together and we're all trying to work toward the common good for our kids here, these ideas just seem to come. I'm not sure how, but they just come."
Throughout the entire 2016-17 school year, CAV staff emphasized the school's guidelines for success –  Caring, Independence, Respect, Cooperative, Learner, and Engaged – and not only wanted the students to learn these values, but take ownership of them as well.
The kids were receptive to the teaching of the guidelines, but just how much of an impact were they really making? That's when the idea of a Color Run materialized. Not only would it be something fun and different, but each of the colors could represent each of CIRCLE's six guidelines for success.  And it could serve as a creative way for the school to celebrate the many successes of the year while encouraging students to keep up the good work for next year.
"We talked about our guidelines for success the whole year, so we thought it would be fitting to put the whole school together in a big Color Run and have us all be colored together," Ms. Emily, who spearheaded the event, said. "We loved the idea and when we brought it to Ms. Fox (CIRCLE principal), she did too. At first, we weren't sure how we were going to construct it, but with our kids, and how much we worked with them this year, we knew they could be successful with it." 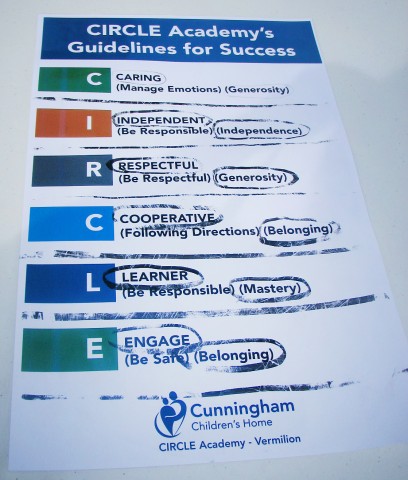 While the Color Run was designed to be a meaningful activity for the school as a whole, it was also a chance for the students to reflect upon their own personal growth and share that with their friends. The kids were given a white t-shirt and with a black marker, they wrote which guideline for success best represented them. And that's what they wore for the Color Run.  After some thought, some listed just one, while others wrote two or three. The teachers wrote all six guidelines on their shirts.
Renee, a 12-year-old who made it her job to make sure the younger kids were ready for the run, had written Caring on hers. "I wrote it because I've learned to be caring to different people and I like to help with things around the school," she said. "That's just me."
The students and staff took off as a group from the starting line and what they saw along the way were words of encouragement.  Written on the sidewalk and on posted signs were things like you got this, push yourself, and way to go. A few of the students were hesitant to participate at first, but after one lap around, they were running right along side their classmates. By the time they had walked or ran the one-mile course, many were covered in color from head to toe but that didn't mask the smiles on their faces or the sheer joy of the activity.
"It was really awesome to end the year this way and to have parents here to support us made it even better," Ms. Emily said.  "It just feels like we're a big family and shows just how much effort our teachers, staff, and students put into being one team."