It was a blustery day in early March but Paula Dowling, Assistant Principal at Cunningham’s CIRCLE Academy-Vermillion in Rossville, and Barbara Miller, the school’s Academic Coordinator, hardly noticed because their hearts were warmed by an achievement of one of their students. Daniel, a junior at CIRCLE-Vermilion, was one of more than 190 high school students from 20 area schools chosen to display their artwork at the 8th Annual Eric Show, held at the Illini Union Art Gallery on the University of Illinois campus. In support of Daniel, Paula and Barbara were attending the show’s opening night reception.

Daniel has a diagnosis of autism spectrum disorder (ASD). ASD is characterized by difficulties in social-interaction, communication challenges, and a tendency to engage in repetitive behaviors. At CIRCLE-Vermillion, teachers allow Daniel to pursue his natural inclination toward art and have supplied him with paper and colored pencils. Daniel chooses to do art during his free time at school and also uses his work on character stories to fulfill some of his language requirements. Barbara has a teaching certificate in art and understands how it helps promote communication, emotional growth, and sensory integration while also fostering social interaction in a fun setting. For Daniel, spending time on art has resulted in tremendous progress in these areas.

As Paula and Barbara entered the gallery, they were greeted by the sights and sounds of many high school students and guests of all ages, milling about enjoying the art and refreshments, and talking up a buzz. Almost immediately, Daniel and his mom spotted Paula and Barbara, and he eagerly brought them to the comment book that resides in all galleries.

With great pride and excitement, Daniel showed them what he had written: “I made it to the Eric Show!” He then whisked them away to where his art was displayed.

Daniel’s featured artwork was The Dragon Knight, a three-dimensional depiction of a dragon holding a sword. Standing several feet high and made entirely out of paper clips, it is a stunning piece. This year, Daniel discovered a great talent for using color, and he added this element to his sculpture with multi-hued twist ties.

His other works are two-dimensional and truly prolific, including an ever-growing family of super characters, heroes and hero leaders, each one with special powers. Daniel faced the difficult task of selecting 10 of his best-looking and favorite characters among dozens. Four of these were displayed on a wall while the others were in a binder, along with “stories” for each. Each character is named and has special talents and unique characteristics. Daniel added color to these as well this year, with each character displaying a unique combination of colors that harmonize.

Paula and Barbara learned from Daniel’s mother that several people attending the opening had already approached and talked to him about his art, including a professor and a graphic designer. The teachers witnessed Daniel speaking with confidence to another artist exhibiting in the show.

“To see Daniel in his element, socializing and being appreciated for his talents, was one of the greatest joys of my career,” Barbara said. “We are very proud of our artist.” 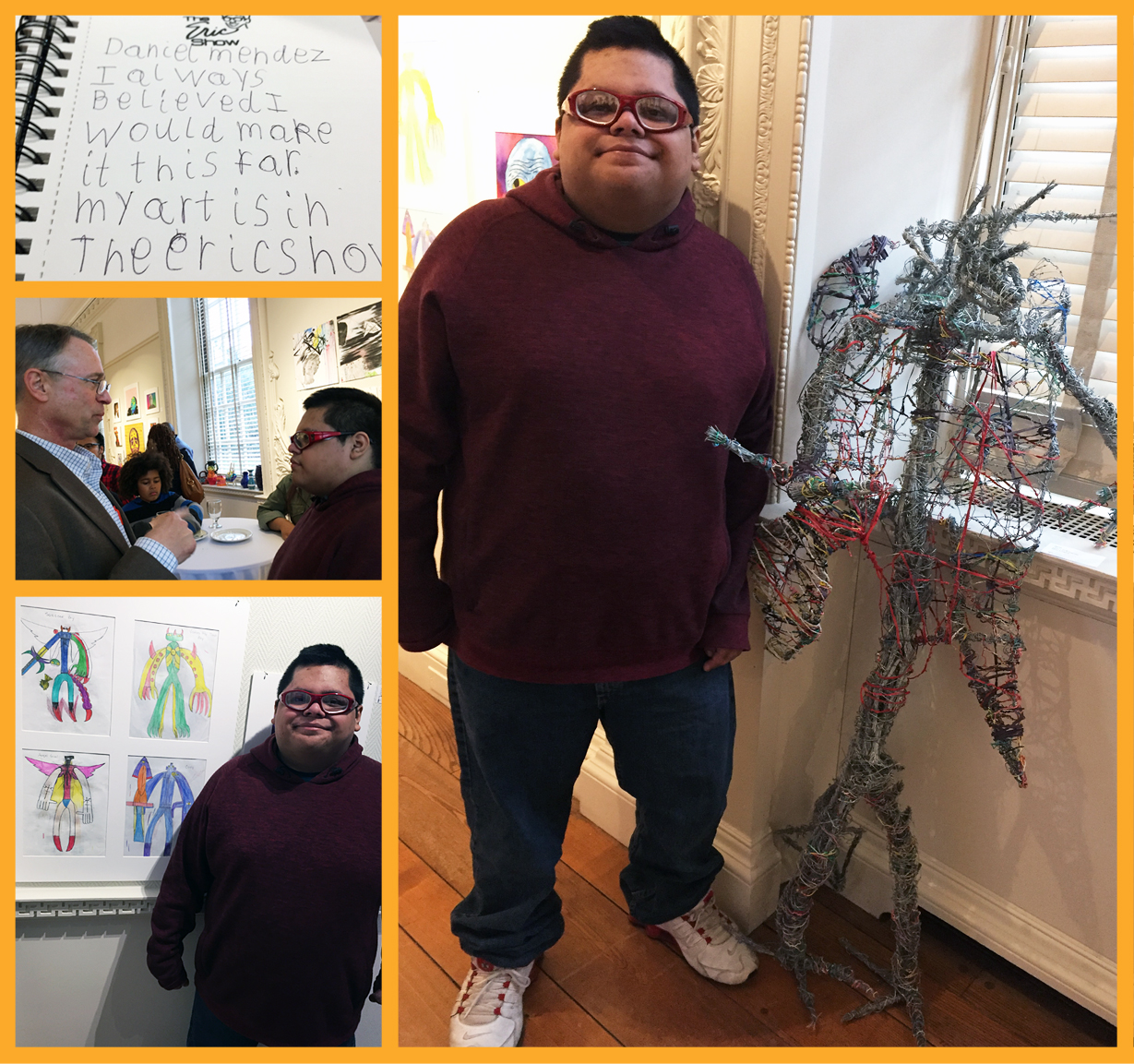 Daniel’s success at the Eric Show was possible because of the efforts of several staff members. Daniel’s teacher Ms. Smith helped him select his characters for the show. She, along with Ms. Rubio, helped Daniel capture the character’s stories while Ms. Tyas assisted with the typing. A shining example of CIRCLE Academy’s vision of empowering students for success - in school, at home, and in the community!

The Eric Show is a juried high school art show that was established in 2010 and is endowed by Dale and Peg Steffensen in memory of Dale's son Eric. Throughout high school, Eric won several awards for his outstanding artwork and demonstrated creativity that was far beyond his years. The Eric Show honors Eric's legacy as well as encourages the amazing young artists of this community. This experience has certainly encouraged Daniel to continue his art and has given him even greater hope for his future.