Adrian* took a bite of his pizza and then shouted across the table, "TJ, TJ, TJ, I love you TJ!"

Reassuringly, TJ responded, "I love you too." 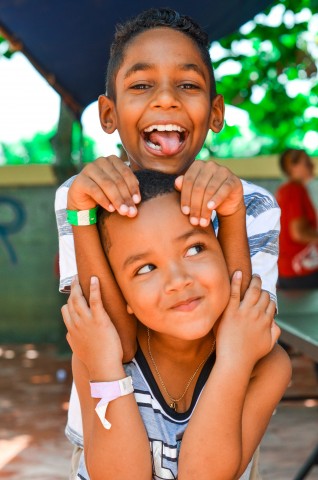 TJ is a case worker for Community Services at Cunningham Children’s Home. He and other members of the Community Services team were gathered for 21-year-old Tamara’s* "Goodbye Party," when Adrian continually expressed his affection for TJ.

Tamara is Adrian's mom and during her two years in Cunningham’s Pregnant and Parenting Teens Program, she made great strides and showed significant growth with parenting skills, financial literacy, independent living education and vocational training. The party was a way to celebrate Tamara's progress and the progress of her young son, Adrian and Jaylin,* as they formally transitioned out of the program. Few were more excited to celebrate than TJ, Tamara's parenting program counselor.

TJ became connected to Tamara, who was pregnant with Jaylin at the time, when he was an instructor in a parenting risk reduction course Jaylin’s father, James* was taking. The course provided instruction on safe sleeping, reducing the risk of SIDS and developing a birth plan.

The day after Jaylin’s birth, James left the hospital to get supplies before he was set to return to take Tamara and the newborn home. Tragically, he was shot and killed before making it back.

When TJ first began working with Tamara, Adrian could never remember his name and would come into the office and say, "Hi case worker!" Over time, however, a bond was formed between TJ and the young family.

"Adrian is high energy and really craved attention from a consistent male role model in his life," TJ said. "He learned to trust me and became responsive and mindful to what I would ask of him."

TJ credits the resources and staff at Cunningham for his ability to develop a supporting relationship with Tamara and her boys. While Tamara has worked very hard to care and provide for her children, at times she has failed to see the dramatic impact her violent and volatile romantic relationships has had on her boys. Cunningham’s "team" approach allowed Tamara to work closely with TJ, but also with Angie and case manager Chalaine on crisis management and building healthy relationships.

TJ's own experience with overcoming childhood trauma helped Tamara to understand it was possible for her to overcome her difficult life situations and trauma. TJ also stressed to Tamara the importance of working hard to provide a better dynamic for her own children. Throughout the two years they worked together, TJ was quick to provide positive reinforcement of Tamara’s successes and strengths, reminding her that her boys loved her and needed her not to fail, even when times were tough. He shared with her that, "It is okay to be vulnerable and frustrated with family members who wouldn’t step up, but you can’t let it define you."

"Beyond all of the work with Tamara and all the concerns and challenges they’ve endured, TJ has touched these young boys lives by serving as a strong male role model that treats their mom with respect, while also giving them positive attention," said Angie, Associate Director of Community Services.

The African proverb, It takes a village to raise a child, which means an entire community of people must interact with children for those children to experience and grow in a safe and healthy environment, couldn't be more true for Tamara and the experience she had with TJ and Cunningham. Her ability to heal, learn and grow and build a better life for her family is a reflection of how Cunningham's "village" develops deep relationships rooted in trust and love and works together to realize our mission to nourish hope through effective solutions so children thrive and families flourish.

Photo by Michael Mims from Pexels